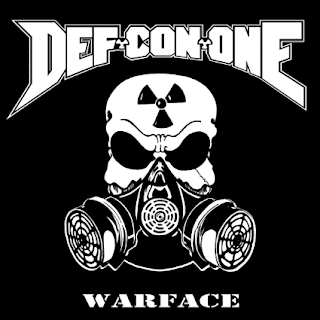 Def Con One - Warface (2012) Scarlet Records
Produced by Def Con One
METAL
Tracks : 1.Never look back 2.March of the dead 3.Warface 4.Hold on 5.Blood 6.Stepped in pain 7.Bullets 8.Feeling cold 9.My halo 10.Hit list 11.In death 12.Give me strength
www.reverbnation.com/defconone
3 out of 5

This is one heavy mutha of an album, "Warface" is the debut from Def Con One that features Antton Lant - Drums (Venom), Johnny Hunter - Guitar (Sanity´s Edge), Steve Miller - Bass and Davey Meikle - Vocals (NuFutureCowboys). You could say their sound lies somewhere between thrash, numetal and grunge. There are obvious influences from Machine Head, Pantera and Alice in Chains, I remember in the 90´s when numetal arrived and many called it aggro-metal and "Warface" suits that genre just perfect. Metal magazines like Metal Hammer and Close Up will probably hype this album when it comes out, singer Davey Meikle reminds a bit of Phil Anselmo of Pantera except on "Bullets" where he is a deadringer for Sebastian Bach. It´s a solid album that won´t disappoint fans of true metal.