The Durango Riot - Backwards over midnight 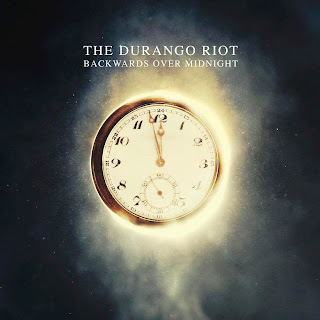 The Durango Riot - Backwards over midnight (2012) Ninetone Records
Produced by Joe Barresi
ROCK
Tracks : 1.Everybody´s got to go 2.Do it like a friend 3.Neighbors 4.Backwards over midnight 5.Your rags, my riches 6.Shiny season 7.A last look 8.I´m coming over 9.Realdogs 10.Gone south
www.facebook.com/thedurangoriot
3 out of 5

This is a cool band, the Swedish band The Durango Riot doesn´t really compromise when they write music, if they feel like blending 60´s pop with a Mexican flavor, they do it. And if they´re crazy enough to head into the Britrock direction but with a punkish attitude, they do it. I think you could call their new album "Backwards over midnight" as cowboy rocknroll because we get a taste of the wild west in some of these new songs. It´s like making a soup of D.A.D, Suede and The Jam. I like this album because it feels so timeless, just check out great stuff like "Do it like a friend" or "Your rags, my riches". Lovely!