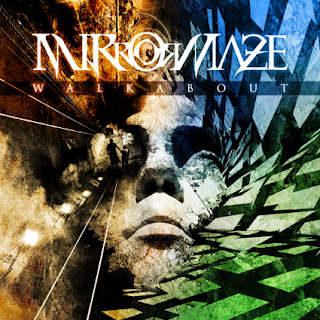 MirrorMaze is an Italian progmetal band, formed in 2008 by guitarist David Penna and keyboardist Sam Lanfranchini. They are joined by singer Fabio D´Amore, bassist Juan Manuel Savoini and drummer Fabio Nasuelli, although singer Fabio D´Amore is playing the bass on the debut album "Walkabout". Guesting on the track "Deeper signs" is Fates Warning singer Ray Alder which is cool, but I think MirrorMaze frontman Fabio D´Amore stand rather solid on his own with his powerhouse voice. This is a lengthy album with 1 hour of technical metal and the sound is pretty massive, not far from Dream Theater´s Awake. But MirrorMaze also knows how to use nuances in their music, just listen to the excellent "Lost in a belief" that is the highlight of the album. Great musicanship here. The soft piece "Missing" is another very nice song as well as the majestic "Broken soul" that will appeal to fans of Symphony X. Good stuff!
Upplagd av RothNRoll kl. 8:31 AM