Rick Wakeman - In the nick of time 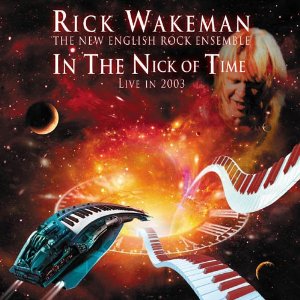 Rick Wakeman and The New English Rock Ensemble - In the nick of time, Live in 2003 (2012) Gonzo MultiMedia Records
Produced by Rick Wakeman
PROGRESSIVE ROCK
Tracks : 1.Catherine Parr / Beware your enemies 2.Out there 3.No eartly connection 4.Dance of a thousand lights 5.The cathedral in the sky 6.White rock 7.Wurm
http://www.rwcc.com/
3 out of 5

The new live album "In the nick of time" from Rick Wakeman was recorded in the U.K on the "Out there" tour in 2003, but it´s available on CD for the first time in 2012. Rick Wakeman´s band aka The New English Rock Ensemble, features Ashley Holt - Vocals, Tony Fernandez - Drums, Ant Glynne - Guitar and Lee Pomeroy - Bass. Singer Ashley Holt auditioned for Deep Purple back in 1968 but joined Warhorse in 1970 and has appeared on many of Wakeman´s albums, Tony Fernandez has played with Wakeman for more than 28 years and then we have 2 new members with guitarist Ant Glynne who has played with Asia and Mike Oldfield plus bassist Lee Pomeroy who is known as the Oracle, simply because he remembers everything. The tracks on this live album are taken from Rick´s solo albums "The six wives of Henry VIII" (1973), "White rock" (1977), "Return to the centre of the earth" (1999) and "Out there" (2003) plus the Yes song "Wurm" which is originally from "The Yes Album" (1971). Highlights are "Dance of a thousand lights" and "Catherine Parr", truly majestic symphonic rock at it´s best. But Ashley´s musical-like voice gets on my nerves on the vocal based tracks and I can only enjoy the instrumental pieces to max.