12 Stones - Beneath the scars 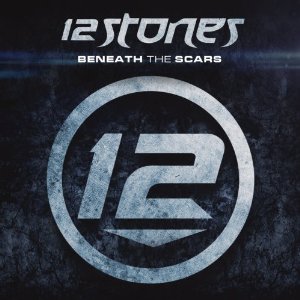 With 2 million albums sold, the Louisiana rock band 12 Stones is to be reckoned with but I have always thought they walked in the footsteps of Nickelback on their 3 first albums. However, they have broken out of the chains of postgrunge music similar to Default and Puddle of Mudd on their new album "Beneath the scars". It´s less postgrunge and more basic hard rock with traces of modern rock, perhaps the label change from Wind up Records to Executive Music Group only did good for the band since the new album is their best so far. This is very much a rocking album with just a few ballads, the 2 first singles "Infected" and "Bulletproof" are major active rock hits. Great songs but what about the killer title track "Worlds collide", love it. While "Psycho" is a traditional modern rock track and a good one too, the brilliant "For the night" and "That changes everything" bring thoughts to Goo Goo Dolls. Just super!
"Beneath the scars" is their first full length album in 5 years since "Anthem for the underdog" in 2007 and it´s definitely worth the wait. Hallelujah!