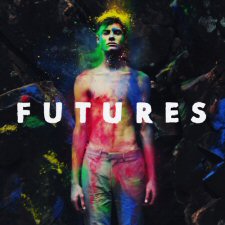 When I did a review of the British rock band Futures debut EP "The Holiday" from 2010, I thought they sounded a bit like Cartel and Jimmy Eat World but their new full length album "The Karma album" is not as edgy as the EP and more of a catchy pop/rock album. I bet they rock harder live when you hear energetic songs like "The boy who cried wolf" and "Start a fire" but when I listen to "Say my name" or "Million lights", my thoughts go to Coldplay meets One Direction. This is a solid album that should´ve been released a year ago on Mercury Records but the band felt no support from the label and decided to take fate in their own hands and now self release the album on their own label Indigo Records. It´s a nice album that could´ve had a bit more edge to it.