Jason Plumb and The Willing - All is more than both 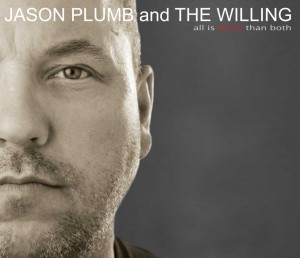 Jason Plumb and The Willing - All is more than both (2012) Soccer Mom Records
Produced by Michael Philip Wojewoda
MIDWEST ROCK
Tracks : 1.First time 2.Losin´ 3.What you leave 4.Alone with you 5.Hold on 6.All by myself 7.On a chain 8.Falling star 9.Under a gun 10.Sweet misery 11.Naturally (ain´t up to me)
http://www.jasonplumb.com/
3,5 out of 5

I just read Pär´s review of this album over at melodic.net and I can only agree, we both dig this album a lot. We´re talking quality midwest rock here with awesome harmony vocals over a cool groovy rock beat, there are moments when I think of Tom Petty and The Wallflowers in others. Jason Plumb did a name for himself by winning a Juno award for best new group in 1994 with his former band The Waltons. They released 5 albums between 1992-2001 and in 2003 Jason made his solo debut "Under and over", two more albums came out in 2007 and 2009 before releasing his brand new album "All is more than both".
He assembled an impressive guest list that includes Alex Lifeson (Rush) on the track "Losin´" and the Barenaked Ladies members Steven Page and Ed Robertson on a few tracks. My favorite tracks are "Naturally", "All by myself", "First time" and "Losin´".
Check it out folks!