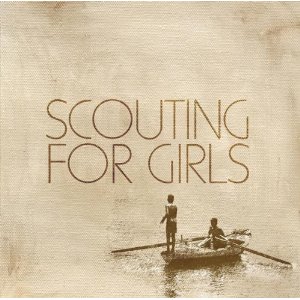 Scouting For Girls - Scouting For Girls (2007) Sony Music
Produced by Andy Green
INDIE POP
Tracks : 1.Keep on waiting 2.She´s so lovely 3.It´s not about you 4.The airplane song 5.Heartbeat 6.Elvis ain´t dead 7.I´m not over you 8.I need a holiday 9.The mountains of Navaho 10.James Bond
http://www.scoutingforgirls.com/
3,5 out of 5

Better late than never, I mean the Britpop band Scouting For Girls reached #1 on the UK album chart with their debut album from 2007 that also features 7 hit singles where 3 are Top 10 hits, but it´s the first time I listen to this album. And it´s really good, the album is filled with bright upbeat piano driven pop in the same vein as The Boo Radley´s, The Adventures and Deep Blue Something. This is music that makes you happy, I love all tracks but I would like to lift up "Elvis ain´t dead" and "It´s not about you" a bit more. Irresistable pop dear friends! This trio also released "Everybody wants to be on TV" in 2010 and in September this year, their 3rd album "The light between us" comes out. Bravo!