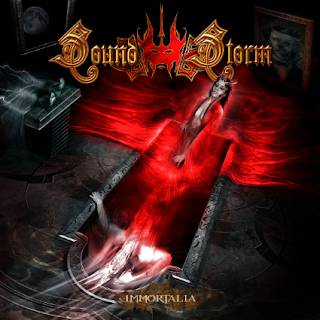 Sound Storm - Immortalia (2012) Scarlet Records
Produced by Ettore Rigotti
POWER METAL
Tracks : 1.Immortalia 2.Back to life 3.The curse of the moon 4.Blood of maiden 5.Faraway 6.Promises 7.Call me devil 8.Seven veils 9.Watching you fading 10.Wrath of the storm 11.The portrait
http://www.powerofsoundstorm.com/
3 out of 5

In the press release of Italian power metal band Sound Storm´s new album "Immortalia", it says "an outstanding mix of powerful guitars, magnificent symphonic choirs, gothic atmospheres and baroque melodies". That sounds like an interesting mix, don´t you think? The new album is the follow up to the critically acclaimed debut "Twilight Opera", and the band truly deliver a bombastic metal album with dramatic and theatrical pieces. I think of them as musical cousins to The Murder of My Sweet, Sabaton and Nightwish, songs like "Back to life", "Faraway", "Promises" and "Seven veils" will without doubt put them on the map of symphonic metal. I like this!