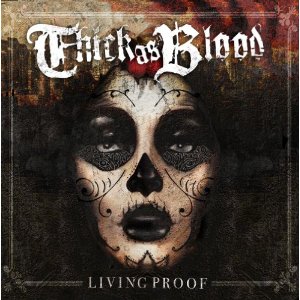 Miami based metalcore band Thick As Blood released their debut "Moment of truth" in 2007 and followed up with the sophomore album "Embrace" in 2009 but now with their 3rd release "Living proof", it´s actually the first time I hear this explosive band. They´re really aggressive but Thick As Blood ain´t the average extreme metal band because you´ll find traces of both punk and thrash metal in their sound. I think their riffs totally glow and I love the energy too, there are moments when I think of Pantera and Bad Religion in others but performed through the eyes of an Underoath fan. Recommendable tracks : "The outsiders", "Damned nation" and "Headaches". But pay close attention to the amazing riff of "Living proof", the title track is a killer.