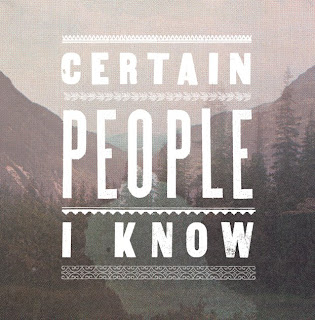 The self titled album from Chicago based Certain People I Know might be a debut album but they´re hardly newcomers in the music business, frontman Robert Nanna and drummer Damon Atkinson played together in Hey Mercedes that released a couple of albums on Vagrant Records between 2001-2003. Nanna shares the lead vocal duties with Lauren LoPiccolo on this new album that is not entirely a 100% emo record, you will find traces of indie rock and punk in their sound as well. Imagine Gatsby´s American Dream meets Copeland on a picnic with Saves The Day and you´ll get Certain People I Know, anyhow, it´s a solid album where my faves are "Strongsuit" and "King of shots".