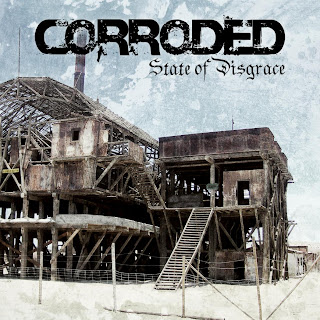 Corroded - State of disgrace (2012) Ninetone Records
Produced by Patrik Frisk
METAL
Tracks : 1.Oderint Dum Metuant 2.Let them hate as long as they fear 3.More than you can chew 4.I will not 5.Uncommon sense 6.I am the god 7.Believe in me 8.Beautiful revolution 9.Dirt 10.As I am 11.Clean my guns 12.Stop me from screaming
www.corroded.se
4 out of 5

Corroded is one of Sweden´s best metal acts right now, their debut "Eleven shades of black" landed like a meteor crash while the 2nd album "Exit to transfer" invaded the charts like an unstoppable army of zombies. They have supported Avenged Sevenfold and their single "Age of rage" was featured in the video game Battlefield. Now do we have to worry that the band has gone commercial on their new album "State of disgrace"? Not really, because the riffs stand in line like hurricanes in the hurricane season in the Mexican Gulf. If you have heard the first single "I am the god", you know what to expect! After the short intro of "Oderint Dum Metuant", the band explode into the metal euphoria of "Let them hate as long as they fear" and the level has been set. I almost feel like runover by track 4 "I will not" that sounds like an avalanche of rocks coming down a rumbling mountain. The riff of track 10 "As I am" should make Tony Iommi proud, great song. There is only one word to comment this album, BRAVO!