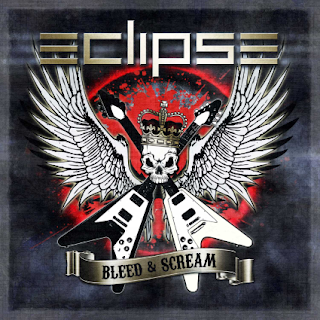 Eclipse - Bleed and scream (2012) Frontiers Records
Produced by Erik Martensson
HARD ROCK
Tracks : 1.Wake me up 2.Bleed and scream 3.Ain´t dead yet 4.Battlegrounds 5.A bitter taste 6.Falling down 7.S.O.S 8.Take back the fear 9.The unspoken heroes 10.About to break 11.After the end of the world
www.eclipsemania.com
4 out of 5

The Swedish hard rock band Eclipse has taken 4 years to follow up their latest record "Are you ready to rock" (2008) and this time they´re back with a bang, the new album "Bleed and scream" is the real deal and without doubt their strongest effort so far. Bandleader/songwriter/singer Erik Martensson and lead guitarist Magnus Henriksson was highly involved in the great AOR project W.E.T in 2009 so we by now that they´re well respected songwriters. We´re talking 80´s hard rock here where the razorsharp guitar riffs shouts out attack and melody. My thoughts go to bands like Pretty Maids, Ozzy and Thin Lizzy (the John Sykes era).
I am truly impressed by this album and crank up the volume real loud to songs like "Battlegrounds", "After the end of the world" and "Bleed and scream".