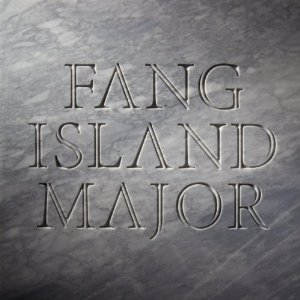 Whenever there´s time for a party, you have your favorite party albums that will be the soundtrack for the evening. Well, sometimes it´s nice to pick out new ones instead of the same ol´ same ol´.........and here´s a record that works just perfect as a party starter. The Brooklyn based trio Fang Island´s new album "Major"!
I don´t usually listen through the entire album sampler that comes along with every classic rock magazine issue but this time I did and found a new favorite band with Fang Island. The song "Asunder" from their new album totally shook me up, I love the upbeat rocking twin guitar harmonies that should please any fan of early Thin Lizzy. I bought this album, hellyeah! I normally write reviews of albums that I get from promoters, record labels and artists but this time I need to have this album straight away. And it´s soo good! This kinda rock music makes me happy, it´s so far away from grunge and aggressive metal you can get. That doesn´t mean it´s not heavy because Fang Island knows how to rock too. Their guitar sound is similar to CKY, just listen to "Seek it out" and you´ll know what I mean. "Major" goes right into my Top 20 list of 2012.