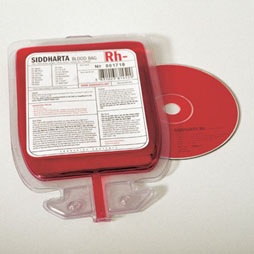 Siddharta is mighty popular band in Slovenia, they formed in 1995 and released their debut EP "Lunanai" in 2000. This album "Rh-" was first released in 2003 with Slovenian lyrics and later released in 2005 with English lyrics plus a few bonus tracks, their latest studio album "Saga" came out in 2009 and last year Siddharta put out the live album "VI". They´ve got an odd sound I must say, anything can happen along the way when you´re listening to this band from progrock to 90´s alternative rock and even celtic folk music. The album is a bit uneven but there are a few cool songs like "Insane", "Kloner" and the heavy "T.H.O.R". The more soft "Rain" bring thoughts to Mike Oldfield in his 80´s era while the experimental "Rooskie" can be described as Talking Heads meets System of a down. The song "Core" is quite weird, imagine Faith No More with the Red Army Choir and you´ll get this funky Cossack song.