Split Fifty - Swing from her fingernails 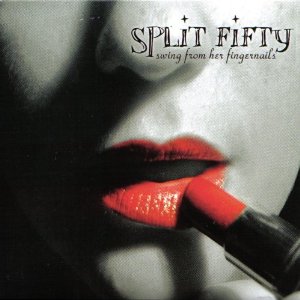 Split Fifty - Swing from her fingernails (2007) Masquerade Recordings
Produced by Split Fifty
POP PUNK
Tracks : 1.Overture in a minor 2.Kiss the corpse 3.Inpatient out 4.Concerto dei morti 5.Let´s dance 6.Weight of these two souls 7.Diablo serenade 8.Libertine 9.Playing with fire 10.Rooftops and razor blades 11.Even the skeletons dance for her 12.Pray for all the souls that sin and fall 13.Forever and forever farewell 14.Swing from her fingernails
www.myspace.com/splitfifty
2 out of 5

Split Fifty is a rock band from Pennsylvania that was offered a deal with Universal Music in 2007 but the band and management disagreed and they ended up not signing. The band released their debut "We live forever" in 2005 and followed up with the sophomore album "Swing from her fingernails" in 2007, they started working on their 3rd album in 2008 but major personal issues rose between the bandmembers and they split up in 2009. The guitarist Ted Felicetti is playing with the new band Don´t Panic, singer Zach Neill, guitarist Josh Bodwell and drummer Mike Lucchetti went on to form American Sixgun. Their last album "Swing from her fingernails" sound like a 2nd division SR 71 with traces of Offspring, we´re talking straight ahead rock in a pop punk suit. The title track is actually pretty good as well as the opener "Overture in a minor", but the album contains lots of fillers.