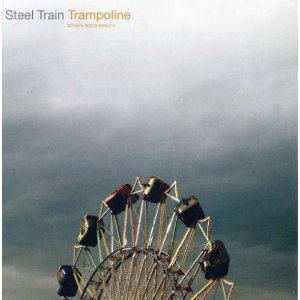 Steel Train - Trampoline (2007) Drive Thru Records
Produced by Mark Trombino
INDIE ROCK
Tracks : 1.I feel weird 2.Black eye 3.Kill monsters in the rain 4.Dakota 5.Alone on the sea 6.Firecracker 7.A magazine 8.Diamonds in the sky 9.Leave you traveling 10.I´ve let you go 11.School is for loser 12.Women I belong to
www.facebook.com/steeltrain
3,5 out of 5

New Jersey based rock band Steel Train is fronted by singer/songwriter Jack Antonoff who writes music like a combination of 70´s pop, Britrock and folk rock. Their debut "Twilight tales from the prairies on the sun" was released in 2005 and followed up with this really great album "Trampoline" in 2007, their self titled 3rd album came out in 2010. The piano driven "A magazine" bring thoughts to Ben Folds while the Britrock-like "I´ve let you go" and "School is for loser" sounds like a mix between Beady Eye and Supergrass. The songs that appeal more to me are the 70´s pop flavored "Kill monsters in the rain", "Alone on the sea" and "Firecracker", definitely for fans of Matthew Sweet.
Upplagd av RothNRoll kl. 7:26 AM