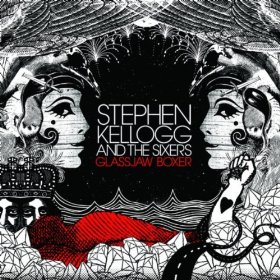 Stephen Kellogg and The Sixers - Glassjaw Boxer (2007) Everfine Records
Produced by Mike Daly
FOLK ROCK
Tracks : 1.Sweet Sophia 2.Glassjaw boxer 3.A cabin in the woods 4.4th of July 5.Sweetest goodbye 6.In front of the world 7.Milwaukee 8.Father´s day 9.Hearts in pain 10.Why are you talking to me? 11.Big easy
www.sk6ers.com
3 out of 5

Stephen Kellogg has released 5 albums as a solo artist before he formed Stephen Kellogg and The Sixers in 2003, after the debut "Bulletproof heart" (2004) they were signed to Universal Music and got the self titled major label release in 2005. Their time at Universal was short and independently released "Glassjaw boxer" in 2007, 2 more albums came out with "The bear" (2009) and "Gift horse" (2011) before the band decided to go on hiatus in 2012. If you´re a fan of adult alternative pop and roots rock, you´re gonna dig this band because their music goes in the same vein as Counting Crows, The Jayhawks and Soul Asylum. The title track can even be described as working class rock, songs that stand out are "Sweet Sophia" and "4th of July". This is a nice album indeed.
Upplagd av RothNRoll kl. 4:39 PM