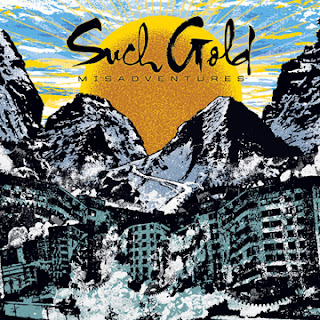 Such Gold - Misadventures (2012) Razor and Tie Records
Produced by Steve Evetts
POST HARDCORE
Tracks : 1.Two year plan 2.Committee circus 3.Storyteller 4.Keyhole M.O 5.Another day 6.Survival of the fondest 7.Tell yourself 8.Higher places 9.Understand and forget 10.Locked out of the magic theater 11.You are the greatest threat
www.facebook.com/suchgold
3 out of 5

I like the energy of this band, Such Gold´s debut album "Misadventures" is a varied affair of old school punk, hardcore and indie rock. They´re a bit technical but not too complex, they´ve got some cool twists and turns but still deliver rather simple punk-ish hardcore songs with melodic choruses. The first single "Storyteller" is fine example of the edgy sound Such Gold deliver, a great song for sure. I also dig "Another day" that is even more melodic than the single, and songs like "Locked out of the magic theater" and "You are the greatest threat" bring thoughts to Story of the year and Thrice, cool! Also thumbs up for the great bass sound, I love it. A promising band.