The Blackout - We are the dynamite 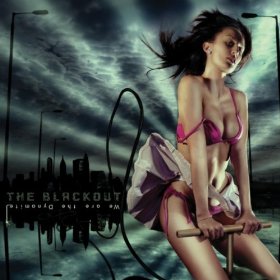 The Blackout - We Are The Dynamite (2007) Fierce Panda Records
Produced by The Blackout
POST HARDCORE
Tracks : 1.Tick Tick BOOM 2.I´ve got better things to do tonight than die 3.I know you are but am I 4.Spread legs not lies 5.The Beijing cocktail 6.Murder in the make believe ballroom 7.Prepare for a wound 8.It´s high tide baby 9.Tops off party 10.She is macho 11.Life and death in space
www.facebook.com/theblackoutband
3,5 out of 5

The Blackout is a great melodic post hardcore band from Wales, their debut full length "We are the dynamite" truly created a buzz in the music industry where they got rave reviews in magazines like Kerrang and RockSound. This album contains 2 songs from the 2006 "The Blackout! The Blackout!" EP along with 9 new tracks where my favorite is "It´s high tide baby" featuring Ian Watkins from Lostprophets on guestvocals. The single "The Beijing cocktail" is another kick ass rocker, not to mention the powerful "I´ve got better things to do tonight than die" that I just love. The Blackout is touring a lot and has supported bands like My Chemical Romance, Blink 182 and Funeral For A Friend, this is a band that I would like to see live. Their sound bring thoughts to A, Lostprophets and Young Guns. Other albums available are "The best in town" (2009), "Hope" (2011) and in January 2013, their 4th album comes out.
Highly recommendable!