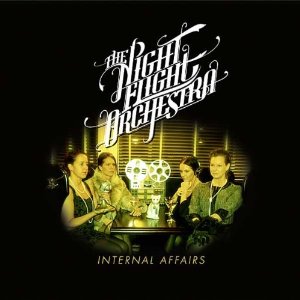 Soilwork singer Björn Strid and Mean Streak guitarist David Andersson started The Night Flight Orchestra to reclaim the 70´s/early 80´s sense for classic melody, they were joined by Arch Enemy bassist Sharlee D´Angelo, Von Benzo keyboardist Richard Larsson and Mean Streak drummer Jonas Källsbäck. And the result is the impressive debut album "Internal affairs" that any fan of classic rock should have in their collection. The opener "Siberian queen" sounds like Camel meets Led Zeppelin with Eric Clapton on guitar and it´s awesome, 2nd track "California morning" sounds like a collaboration between Kiss and Boston and it´s without doubt one of the best tracks on the album.
"Glowing city madness" can be described as a southern rock version of Steely Dan, real groovy. 4th track "West Ruth Ave" is a 70´s disco rock song, totally irresistable and the following "Transatlantic blues" bring thoughts to Whitesnake in a late 70´s AOR mood. "Miami 5:02" is a classic hard rock a la Rainbow while the title track is more of a funky westcoast song. "1998" could´ve been a lost Bob Seger song and up to here the album is stunning. But track 9 and 10 are a bit weaker, "Stella ain´t no dove" is The Night Flight Orchestra in their Björn Skifs mood. The last song "Green hills of Glumslöv" takes the album back to a higher plateau again, what an AOR smash! Buy or die!