The Silent League - Of stars and other somebodies 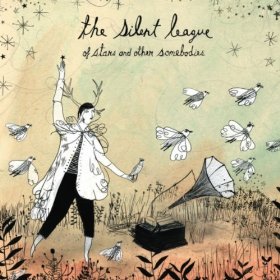 The Silent League - Of stars and other somebodies (2007) Something In Construction Records
Produced by Justin Russo
MELANCHOLIC POP
Tracks : 1.Canary in the coalmine 2.Victim of aeroplanes 3.Kings and queens 4.Before you started 5.Let it roll 6.Character assassination 7.The tolka, not the liffey 8.Untied 9.Out of reach 10.Second canary test 11.Prayer for the nihilist 12.A dry hallway
www.silentleague.com
2,5 out of 5

It´s not easy to describe the sound of The Silent League, but take a piece of psychedelic 60´s pop and blend it with ambient orchestral music and you´ll get their 2nd album "Of stars and other somebodies" from 2007. The band was founded by Justin Russo of Mercury Rev, their debut "The Orchestra, sadly, has refused" came out in 2004 and this album was followed by "But you´ve always been the caretaker" in 2010. The song "Out of reach" sounds like Neil Tennant of Pet Shop Boys singing with The Polyphonic Spree performing the music of Mercury Rev, the song "Before you started" bring thoughts to Stars of Track and Field meets Pink Floyd. Quite nice but the best tracks are "Victim of aeroplanes" and "Kings and queens", beautiful songs indeed.