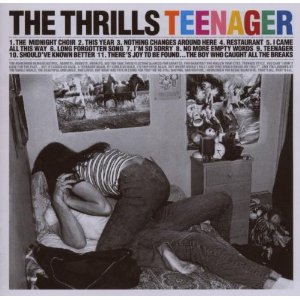 The Thrills - Teenager (2007) Virgin/EMI Records
Produced by Tony Hoffer
INDIE ROCK
Tracks : 1.The midnight choir 2.This year 3.Nothing changes around here 4.Restaurant 5.I came all this way 6.Long forgotten song 7.I´m so sorry 8.No more empty words 9.Teenager 10.Should´ve known better 11.There´s joy to be found/the boy who caught all the breaks
www.myspace.com/thethrillsofficial
3 out of 5

The Irish band The Thrills were active between 2001-2008, their debut "So much for the city" reached #1 in Ireland but their 3rd album "Teenager" was more or less a commercial fiasco and EMI dropped the band after the poor sales. This album is not bad though, I think it´s a charming record with sunny and bright 60´s pop mixed with Britrock and a touch of folkrock. Highlights are "Long forgotten song" plus the two singles "The midnight choir" and "Nothing changes around here", there are moments when my thoughts go to The Adventures and Gregg Alexander. Very cool. Their drummer Ben Carrigan released his solo album "The greatest narrators" in 2011, but I have no clue how that one sounds like.