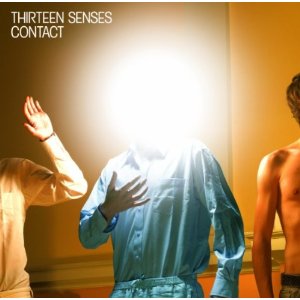 Thirteen Senses - Contact (2007) Mercury Records
Produced by Anton Supple
ALTERNATIVE ROCK
Tracks : 1.Contact 2.All the love in your hands 3.Animal 4.Call someone 5.Follow me 6.A lot of silence here 7.Spirals 8.Talking to sirens 9.Under the sun 10.Spark 11.Ones and zeroes
www.thirteensenses.com
3,5 out of 5

Earlier when I wrote for melodic.net, I hardly ever turned down any offer of reviewing an album and I got lots and lots of tip´s from friends to check out new bands all the time but it got out of hand. Around 2006-2007, I found myself sitting with a couple of hundreds of CD´s that I hadn´t listened to yet so I had to stop. I continued to listen to new albums but this pile should start collecting dust till recently when I decided to listen to all of those 5 year old albums. Therefor, all of my reviews of old releases here but there´s only 2 left after this one and then back to new albums again.
The British rock band Thirteen Senses released their debut "The invitation" in 2005 and followed up with "Contact" in 2007 which is a really good Britrock album in the same vein as Embrace, Aqualung and Keane. Both piano driven and guitar oriented rock, the single "All the love in your hands" is one of the highlights along with the title track and "Animal". The band also released the 3rd album "Crystal sounds" in 2010.