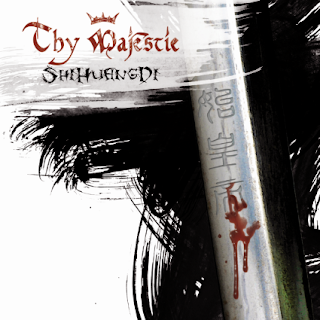 Thy Majestie - ShiHuangDi (2012) Scarlet Records
Produced by Thy Majestie / Giuseppe Orlando
POWER METAL
Tracks : 1.Zhoongguo 2.Seven reigns 3.Harbringer of a new dawn 4.Siblings of Tian 5.Walls of the emperor 6.Under the same sky 7.Farewell 8.Huanghun 9.Ephemeral 10.End of the days 11.Requiem
www.thymajestie.com
3,5 out of 5

The Italian power metal band Thy Majestie have this thing for concept albums, they did one in 2005 about "Jeanne D´arc" and this year their 5th album "ShiHuangDi" tells the story about the first emperor of a unified China in 221 BC. The music is more epic and orchestral compared to their latest albums and a return to the sound of their first albums "The lasting power" (2000) and "Hastings 1066" (2002). The band also change lead singers quite a lot, their 4th vocalist Alessio Taormina make his debut on "ShiHuangDi" and he´s good too. When I did an interview with Thy Majestie back in 2005, they told me Iron Maiden was their biggest influence but the music of this new album has more in common with Sonata Arctica and Iron Mask.
It´s bombastic and melodic, a really great album if you ask me.
Upplagd av RothNRoll kl. 8:40 AM