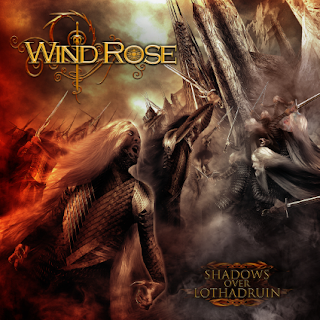 The Italian band Wind Rose started out playing covers by bands like Dream Theater, Blind Guardian and Symphony X in 2005, a few years later they started writing their own material where the result is the debut album "Shadows Over Lothadruin". This is a concept album in the style of Lord of the rings, and the band describe their sound as symphonic progressive power metal which suits the album just fine. It´s well performed where 7 tracks are short pieces and the other 9 full length songs, but I think the music gets a little too pretentious and over ambitious at times which is a shame since they write some really good stuff too such as "Close to the end" and "Led by light". A decent album anyhow.