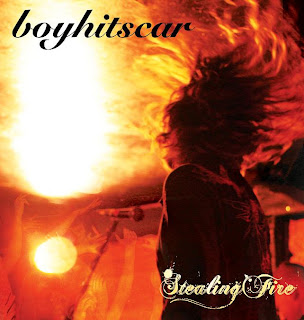 Perhaps there should be a BoyTunes Festival with bands starting with the name Boy, I mean there are quite a few such as Boysetsfire, Boys Like Girls, Boys Night Out and Boy Hits Car. And speaking of the L.A based Boy Hits Car, this band should be bigger for sure. They have changed label for each album starting with the debut "My animal" in 1998 and then self titled album in 2001 which was supposed to be their breakthrough album. Wind Up Records dropped the band after the poor sales and the band moved over to Rock Ridge Music for the release of their 3rd album "The passage", all credit to the band for not trying to become mainstream but instead continued to deliver slightly progressive alternative rock. In 2008, Boy Hits Car started working on their 4th album which was completed and released last year. "Stealing Fire" is their best album to date and a wetdream for a fan of pro-musicianship and well crafted songwriting. They should open for Rush so more people discover this brilliant rock band. Take 33% Dredg, 33% Led Zeppelin and the rest with Karnivool´s progressive metal and you´ll get excellent tracks like "It´s alright", "One kiss away" and "Stealing fire from the sun". PHEW!