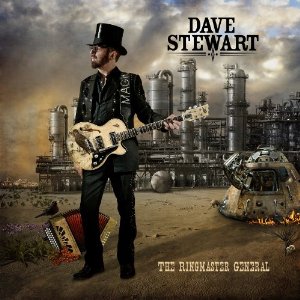 Dave Stewart - The Ringmaster General (2012) Weapons of Mass Entertainment
Produced by Dave Stewart / Mike Bradford
ROCK / SOUL
Tracks : 1.I got love 2.Just another fall 3.A different man now 4.Drowning in the blues 5.Girl in a catsuit 6.Slow motion addict no.2 7.You took my love 8.God only knows you now 9.The ringmaster general 10.Story of success 11.A new song for Nashville
www.davestewart.com
3,5 out of 5

There´s no doubt Dave Stewart is a maestro of pop music, he was one half of the mighty successful Eurythmics between 1980-1990. Dave continued to release solo albums and also produced albums with artists like Mick Jagger, Jon Bon Jovi and Tom Petty. His 7th solo album "The ringmaster general" is the follow up to last year´s "The blackbird diaries" and like before, Dave is a genre crossing songwriter where his songs find their home in blues, soul, rock and country. The duet with Joss Stone of "I got love" opens the album and it´s a groovy rock song that sounds like a cousin to "Mercenary man". The following "Just another fall" which is a duet with Diane Birch is one of the highlights of "The ringmaster general", a really passionate song, I love Dave´s cool vocal performance here. The more rocking "Girl in a catsuit" is guested by awesome guitarplayer Orianthi, she is a true pro. The slow "You took my love" is one of my favorites too, a beautiful ballad where Dave shows what a gigantic melody maker he is. The slightly prog-ish "The ringmaster general" bring thoughs to Roger Waters, very nice. The Grammy award winning queen Alison Krauss does a memorable performance on "Drowning in the blues", so there are plenty of reasons to check out this album for sure.