Empires of Eden - Channelling the infinite 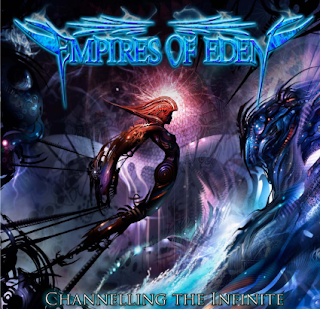 Empires of Eden - Channelling the infinite (2012) EOE Records
Produced by Stu Marshall
POWER METAL
Tracks : 1.Cry out 2.Hammer down 3.This time 4.Channelling the infinite 5.Lions for lambs 6.Cyborg 7.World on fire 8.Your eyes 9.Born a king 10.As flames scorch the ground 11.White wings 12.Hammer down (all star version)
www.empiresofeden.com
3 out of 5

Empires of Eden is a powermetal project led by Australian guitarist Stu Marshall, the new album "Channelling the infinite" is the follow up to the sophomore release "Reborn in fire". All music is composed and performed by Stu Marshall except drums by Jasix, each song on "Channelling the infinite" also features a guest lead vocalist that wrote the lyrics for the song they performed on. Some of the names are quite famous like U.D.O, Rob Rock (Driver), Steve Grimmett (Lionsheart) and Mike DiMeo (Riot). Other less famous singers on the album are Alessandro Del Vecchio (Edge of Forever), Ronny Munroe (Metal Church) and Sean Peck (Cage), and some new names such as Vo Simpson (Darker Half), Carlos Zema (Outworld), Danny Cecati (Pegazus) and Louie Gorgievski (Crimsonfire). Soundwise, this album lies between Gamma Ray and Avantasia. We´re talking fast and bombastic powermetal here, the production is really good but why do the majority of the singers soundalike? I can´t seperate one from the other except U.D.O, Rob Rock and Mike DiMeo. The best tracks are "Cry out", "Lions for lambs" and "Your eyes".
A solid album!