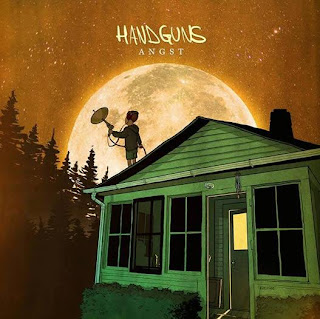 Handguns - Angst (2012) Pure Noise Records
Produced by Handguns
POP PUNK
Tracks : 1.Porch light 2.Drag you out 3.Long october 4.Stay with me 5.Early retirement 6.Song about you 7.Capsize 8.The war at home 9.Nice choice, nice life 10.Still running away 11.Fade away 12.Where I belong
www.facebook.com/handgunspa
3 out of 5

Pennsylvania based pop punk band Handguns released their debut "Anywhere but home" in 2010 and followed up with the "Don´t bite your tongue" EP in 2012, this ain´t a lazy band because this fall their 2nd release this year hits stores. "Angst" is their 2nd full length album and it´s filled with 12 short and upbeat tracks that are more punk than pop, you´ll find songs with hit potential like "Song about you" and "Nice choice, nice life". But my personal faves are the opening track "Porch light" and the Zebrahead flirt of "Drag you out", you can catch em on tour with Forever Came Calling this fall.
This band´s got both energy and talent.