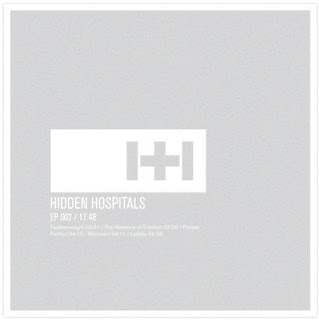 Earlier this year, I reviewed Chicago based Hidden Hospitals debut EP "001" and gave it 4 stars over at melodic.net. The band is made up of members from Damiera and Kiss Kiss, their sound has a lot in common with bands like Thrice, Anberlin and MuteMath. A bit complex, experimental and progressive but also with traces of modern alternative rock. They might not be the first choice for active rock radio because their songs aren´t supercatchy on a first spin, however they grow and once you discover their secret of successful songwriting, you´re a fan!
I think the follow up simply called "EP 002" doesn´t match the first one, but the new one is really good too. The songstructures are even more adventurous on these 5 new tracks, the melodies aren´t in the same heavyweight class as the songs on the debut EP but we´re still talking quality stuff here. If you put these two EP´s together as one album, you´ll get one helluva full length for sure.
Upplagd av RothNRoll kl. 10:12 AM