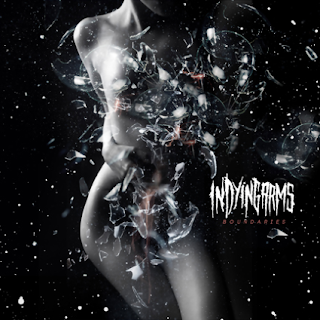 In Dying Arms - Boundaries (2012) Artery Recordings / Razor and Tie
Produced by Stephen Hawkes
METAL
Tracks : 1.Second best 2.Running out of time 3.The core of my existence 4.Bathed in salt 5.Horizons 6.Blind to the truth 7.My rise and fall 8.Dominius 9.GOREgeous 10.11-11
www.facebook.com/indyingarms
3,5 out of 5

In Dying Arms formed in 2006 and has released 4 albums including the new one "Boundaries" which is their first for Artery Recordings and Razor and Tie, this Baltimore based metal band combine metalcore with deathmetal and even post hardcore and the result is massive but also a bit unique. The listener can expect anything from deathmetal growls to clean vocals and even atmospheric guitar melodies, but mainly this is a superheavy metal album that feels more modern than retro. The production sounds expensive and the songs are well crafted, you can tell there´s a thought behind these songs. The single "Bathed in salt" is a smash but I also dig the space metal of "11-11", not to mention the ten ton metal of "Second best". This band rocks!