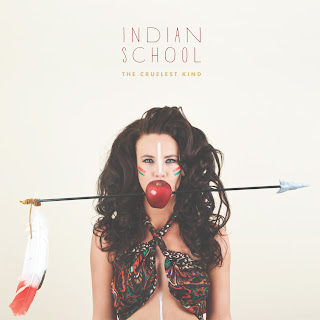 The new band Indian School features members from the pop punk band Audio Karate that released two albums with "Space camp" (2002) and "Lady melody" (2004) before they split up in 2005. A few years later, 3 members of Audio Karate teamed up with pianist Eric Wood and guitarist Anthony Leach and formed Indian School. Gone with the wind is the pop punk sound and instead, this new promising band deliver a classic rock influenced indie rock EP with the same energy as Bruce Springsteen´s E Street Band mixed with a touch of The Clash and even The Strokes. They´ve got a big sound and I just love the fat distorted bass on tracks like "Rob your house" and "High low", the opening track "Elvis" is perfect for radio and if you´re into Britrock a la Oasis, then you should listen to "Cocktail flu". Great song.
Highly recommendable!