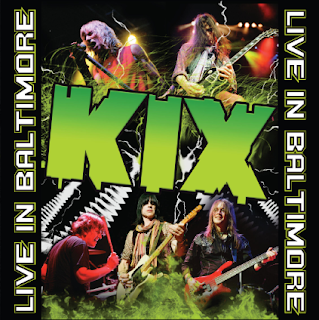 I must admit that I was never a big fan of 80´s hair metal band Kix, I always thought they sounded like a 2nd division Ratt but now with this new live album in my hands. I can also compare them to straight ahead rockers Cinderella, and throw in some L.A rock a la Poison into the mix and you´ve got yourself a dose of Kix. The band celebrate 30 years in the business and with 4 original members left in the line up plus the addition of bassist Mark Schenker who´s been in the band for the past 9 years. Kix released 6 studio albums between 1981-1995 and the setlist of this live album are taken from all albums except "Cool kids" (1983) and "Show business" (1995). Back in the day they worked with some of the best producers like Tom Allom, Beau Hill, Taylor Rhodes and Tom Werman and fans will be very pleased to hear that Kix are working on a brand new album to be out in 2013. The sound of "Live in Baltimore" is pretty good and I do enjoy their 1988 hit "Don´t close your eyes", as a matter of fact, 5 songs are taken from their highest charting album "Blow my fuse" from 1988. The die hard fans will truly dig this live album but I can live without it.