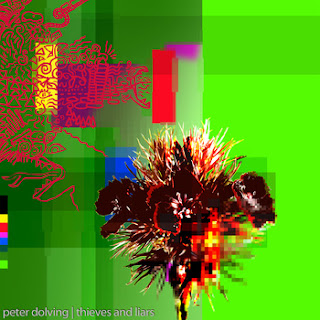 Peter Dolving - Thieves and liars (2012) Independent
Produced by Peter Dolving / Tue Madsen / Fredrik Reihnedahl
ALTERNATIVE ROCK
Tracks : 1.Meinhof 2.Song for you 3.Hands on 4.One sweet moment 5.Ordinary folk 6.Sunday mornings 7.Cocksucker blues 8.My will to die 9.No solicitors 10.So sick 11.All this beauty
http://peterdolving.bandcamp.com
3,5 out of 5

Peter Dolving (MaryBeatsJane, The Haunted) has had a roller coaster life, the Swede has been threatened to life by a record label CEO, he´s the owner of 2 Swedish Grammys, he has also worked with Scott Reeder of Kyuss, not to mention the act of a prison warden at the Gothenburg Opera. He got tired of living the rocknroll life touring so Peter Dolving decided to work on his solo debut "Thieves and liars", the result is quite surprising with a sound that is rather rare these days. Imagine Jane´s Addiction meets Nine Inch Nails with a touch of King Crimson (Adrian Belew era) and we´re close to the 11 tracks of "Thieves and liars", although Dolving would probably say he is more influenced by bands like Radiohead, The Tea Party and New Order. The listener do get a major dose of experimental, slightly industrial, alternative new wave rock here. I´m fascinated with songs like "Meinhof", "Hands on" and "All this beauty". Highly recommendable!
Upplagd av RothNRoll kl. 5:43 AM