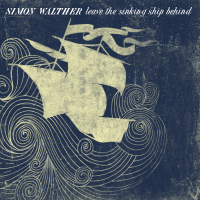 There are many artists passing by in my head while listening to Norwegian guitarist/singer Simon Walther´s new album "Leave the sinking behind", this postrock/dreampop affair bring thoughts to Sigur Ros, Radiohead, Kent and even Muse. At first, I thought the album was a bit weak but it grows. There are some good songs on the album like the upbeat "My knees went weak" and the Led Zep flirt of "Running", the dreamlike pop song "Head back home" sounds like a mix between Sigur Ros and Kent. The music is very poetic and colorful, just listen to the title track "Leave the sinking ship behind" which is the best song of the album. I have a hard time liking songs such as "A bide with me", "Try to hide" and "Nevermore sleep alone", they are just too psychedelic. But like I said, there are some fine moments here.