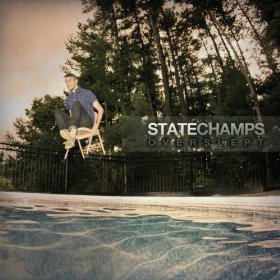 New York based State Champs released their debut album "Apparently I´m nothing" in 2011 and now follow up with the brand new "Overslept" EP, there´s nothing revolutionary about their music but all records doesn´t have to be unique or groundbreaking. Sometimes it´s just enough to hear good songs in a genre that is filled to max with equal sounding bands, State Champs has written 4 new songs that sound catchy and will put you in a good mood straight away. I read a comment on iTunes that their music works just fine to skate to, well I´m not a skater but I reckon the person´s right about it. This EP is well performed and well produced, the opening track "Tonsil hockey" is really short and I don´t really have an opinion about it but I do like the fast "Remedy" a lot.