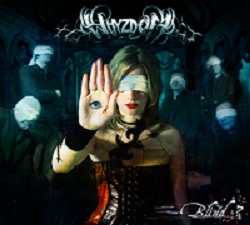 Whyzdom - Blind? (2012) Scarlet Records
Produced by Vynce Leff
METAL
Tracks : 1.The lighthouse 2.Dancing with lucifer 3.Cassandra´s mirror 4.On the road to Babylon 5.Paper princess 6.The spider 7.The wolves 8.Venom and frustration 9.Lonely roads 10.The foreseer 11.Cathedral of the damned
www.whyzdom.com
3 out of 5

The French band Whyzdom was formed in 2007 by guitarist/composer Vynce Leff, the ambition was to create a symphonic metal band with orchestral choirs and fronted by a female vocalist. Their debut "From the brink of infinity" was released in 2009 leading the band to support artists like Tarja and Delain, another 3 years went by and there´s a new chapter of the band with new singer Elvyne Lorient replacing Lisa Middelhauve. Their new album "Blind?" will be out in October and it´s truly a bombastic affair of epic metal but my first impression is that the album is way too long with a running time of 80 minutes. 4 tracks are longer than 8 minutes and it can be a little too much of the good here, you can of course draw parallels to Nightwish but also The Murder of My Sweet. Tracks such as "Cassandra´s mirror", "On the road to Babylon" and "Lonely roads" are really good. The guitar solo of "Paper princess" bring thoughts to Alex Lifeson and it´s so cool, the 2nd track "Dancing with lucifer" is a bit boring though and some parts of the 11 minute "Cathedral of the damned" are quite interesting but like I said - it´s just too long.