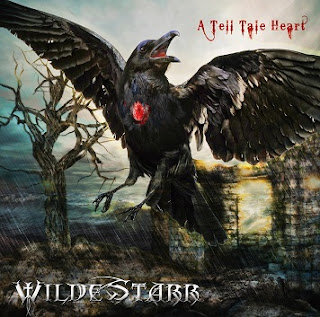 WildeStarr is a heavy metal band featuring former Vicious Rumours bassist Dave Starr on bass/guitars, London Wilde on lead vocals/keyboards and Josh Foster on drums. They´re from San Fransisco and was formed in 2003, their debut "Arrival" was released in 2009 and became mighty popular in Japan. The band is heavily influenced by bands like Judas Priest, Queensryche (early era) and Savatage, female singer London Wilde sounds like a male with a high pitch and at times reminds a bit of Tony Harnell (TNT). If you´re a fan of razorsharp guitars and pure 80´s metal, you should look no further because WildeStarr´s new album "A tell tale heart" is stunning. The songs are inspired by the stories of Edgar Allen Poe and let me tell you, the music is epic in tracks like "Immortal", "Transformis Ligea" and "Usher in the twilight". London Wilde is one of the best female singers I´ve heard in a long time, turn off the light and enjoy every second of "Last holy king". Highly recommendable!