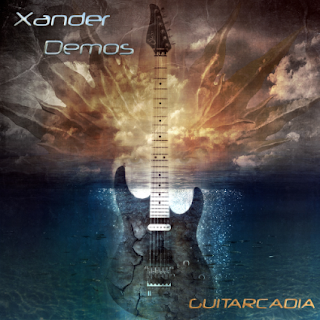 Xander Demos is a really fast heavy metal guitarist from Pittsburgh, USA. Xander is also a member of the party rock band Into the arena, I bet they took their bandname from the instrumental track by MSG. Xander is influenced by guitarists like Shawn Lane, Eric Johnson, Steve Vai and Jason Becker and has supported artists like UFO, Adrenaline Mob and Kip Winger. The debut album "Guitarcadia" will only appeal to fans of technical guitarplaying in the metal genre, Xander is a better guitarplayer than he is a songwriter for sure. Only 2 songs are performed with vocals, his own "Under a darkened sky" featuring Kavin Rasel on lead vocals and it´s a mediocre heavy metal song. The other one is a hard rock version of Don Henley´s classic "Boys of summer", it´s ok and Mike Sciullo sing well but the original is lightyears better. The album also contains an instrumental cover of Chris DeBurgh´s "Lady in red" and it´s the best song on "Guitarcadia", I prefer the slow and more melodic playing from Xander Demos than the super fast solos that he insists on giving us on each and every song. The production is way too sharp so I get pretty tired of hearing the same wall of sound during these 10 tracks. Not my cup of tea.