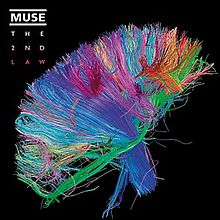 What´s the point in making the same album twice? That must be Muse´s motto, they always look forward and keeps developing their sound but still perform it with their typical trademark of Bellamy´s dramatic vocals and the band´s futuristic rock. On their new album "The 2nd Law", the trio is influenced by dubstep and collaborated with Nero on the 6th track "Follow me". We also get a taste of dubstep rock on the title track "Unsustainable" which sounds like a show opener to me, let´s see in December when I have my tickets ready for the show in Stockholm. However, fans of the progressive side of Muse will be much pleased to hear majestic tracks like "Supremacy" and "Explorers". The new single "Madness" is a smash, just like the 2012 Olympic theme "Survival". I get goosebumps everytime I hear the outro of that Queen-like song. This is also the first time the band gets personal and sing about relations and alcoholic problems like bassist Chris Wolstenholme sings in "Save me" and "Liquid state". Those songs are different but very good, I can only use one word for this album. EPIC!
Upplagd av RothNRoll kl. 1:58 PM