All That Remains - A war you cannot win 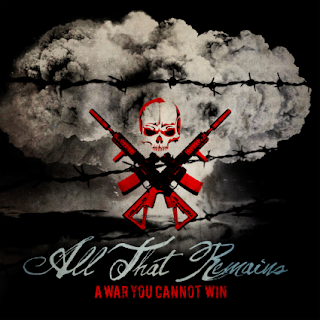 All That Remains - A war you cannot win (2012) Razor and Tie Records
Produced by Adam Dutkiewicz
METAL
Tracks : 1.What if I was nothing 2.You can´t fill my shadow 3.Intro 4.Just moments in time 5.Not fading 6.Calculating loneliness 7.A war you cannot win 8.Down through the ages 9.Sing for liberty 10.Stand up 11.A call to all non believers 12.Asking too much
www.allthatremainsonline.com
3,5 out of 5

"A war you cannot win" is the 6th studio album from metallers All That Remains and this band doesn´t really need any introduction since they sold more than 900,000 albums and played at both OzzFest and Download. The new album is once again produced by Killswitch Engage guitarist Adam Dutkiewicz who has worked with the band on all their albums except one, "A war you cannot win" contains 2 instrumental pieces, a few really melodic songs and the rest is thundering metal. I love their mix of metalcore and active rock, one moment they sound like Breaking Benjamin and in the next, more towards In Flames. The best tracks are "What if I was nothing", "Not fading" and "Stand up", but on the other hand....it´s a bloody great record.