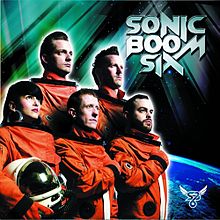 Sonic Boom Six - Sonic Boom Six (2012) Xtra Mile Recordings
Produced by Peter Miles
ELECTRO ROCK
Tracks : 1.For the kids of the multiculture 2.Virus 3.Karma is a bitch 4.S.O.S 5.Gary got a gun 6.The high cost of living 7.Who will survive 8.Keep on believing 9.Flatline 10.Karma is a lady
www.sonicboomsix.co.uk
4,5 out of 5

The U.K based dance rock act Sonic Boom Six formed in 2002 and has released 4 albums but I believe their new self titled album will be their ticket to success, this band could very well be the next big thing from U.K. They deliver groovy riffs, dance beats, rap and melodic male/female vocals on their first album for Xtra Mile Recordings. This is fun music and I just can´t enough of songs like "S.O.S" or "For the kids of the multiculture", imagine t.A.T.u meets Extreme with an 80´s party flavor and we´re close to the sound of their new album. The new single "Virus" is a smash, not to mention the rocker "Karma is a bitch". That songs rocks. Good heavens, what a great band!
Upplagd av RothNRoll kl. 4:12 PM