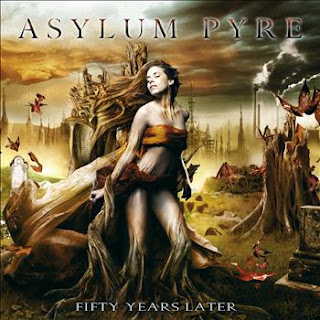 Asylum Pyre - Fifty Years Later (2012) Massacre Records
Produced by Asylum Pyre
SYMPHONIC METAL
Tracks : 1.Will you believe me 2.Dead in Copenhagen 3.The frozen will 4.These trees 5.The Herd 6.Fisherman´s day 7.Against the sand 8.Any hypothesis 9.Just before the silence 10.Fifty years later
www.asylumpyre.com
2 out of 5

The French symphonic metal act Asylum Pyre formed in 2003 and released their debut album "Natural instinct" in 2009, for the sophomore album "Fifty years later" they recruited the new singer Chaos Heidi. You can tell they´re heavily influenced by bands like Epica and Nightwish, perhaps not as opera-like but more of a modern symphonic metal sound. Unfortunately, Asylum Pyre doesn´t belong in the same division as Epica and Nightwish. The French female fronted band pull off some great songs like "These trees" and "Against the sand" but there are a few mediocre songs as well such as "The Herd", "The frozen will" and "Dead in Copenhagen". This should´ve been an EP instead.
Upplagd av RothNRoll kl. 7:49 AM