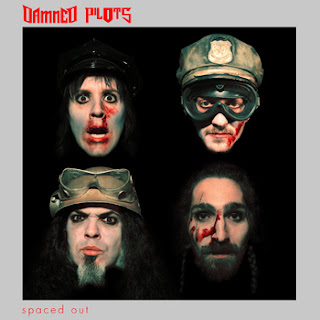 Damned Pilots - Spaced Out (2012) Independent
Produced by Bardy / Damned Pilots
METAL
Tracks : 1.Believe me now 2.My word 3.Make my day 4.Believin in 5.Sleeping in the fire 6.The masonic rite of Ynnoc O.
http://damnedpilots.bandcamp.com/album/spaced-out
3 out of 5

Damned Pilots is a cool band from Italy, they describe their sound as doom pop and I think it´s rather suitable. Their new "Spaced out" EP contains 2 covers and 4 original tracks, the EP opens with an odd cover in E.L.O´s "Believe me now" from their "Out of the blue" album. I think it´s a great choice and their version sounds really nice, the other cover is WASP´s "Sleeping in the fire" which suits the band just fine. Damned Pilots own songs goes in the same style but with traces of Rob Zombie and Hawkwind, this is space metal so to speak. The best song is "My word", the chorus kick ass. The calm "Believin in" is almost psychedelic and progressive, a grower for sure. Give this band a chance.
Upplagd av RothNRoll kl. 5:02 PM