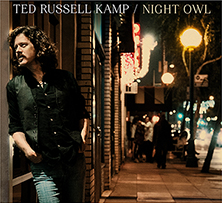 Ted Russell Kamp - Night Owl (2013) PoMo Records
Produced by Ted Russell Kamp
FOLK ROCK
Tracks : 1.Smile alone 2.Right down to the wire 3.Another love song 4.Fireflies 5.A whole lot of you and me 6.The last drop 7.Santa Ana winds 8.At the end of the day 9.My songs for you 10.I been watching you 11.My heart has a mind of it´s own 12.Where out west 13.When the radio goes dead 14.Another love song (Tulsa style)
www.tedrussellkamp.com
3 out of 5

Ted Russell Kamp is hardly a newcomer in the music business, he released his debut album in 1996 and his 7th studio album "Night Owl" is set to be released in January 2013. This record is written and recorded on the road in different locations such as L.A, Nashville, Tulsa and Helsinki, Finland. Ted says about the new album "It´s more of a late night relaxing listen than many of my other records" and I can only agree, you can almost imagine yourself sitting in the hotel room next to Ted when he´s singing songs like "My songs for you" and "My heart has a mind of it´s own". Ted likes to blend varied genres like Americana, Country and Folk Rock and the result is quite comfy and enjoyable. His passionate vocal performance lifts the music and there are moments when he reminds of Van Morrison, this is a good album where my favorites are "Smile alone", "Santa Ana winds" and "When the radio goes dead".
Upplagd av RothNRoll kl. 1:15 PM