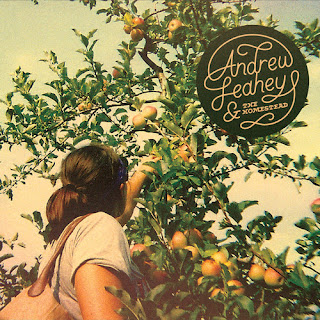 Andrew Leahey and The Homestead - Summer Sleeves (2013) Independent
Produced by David Barbe / Andrew Leahey
ROCK
Tracks : 1.Little in love 2.Don´t make me sad 3.Waiting on a plane 4.Who wants an easy love
www.andrewleaheymusic.com
3 out of 5

Nashville based Andrew Leahey and The Homestead debuted with their self titled album in 2011 and during the long trips between Nashville and his native Richmond, Virginia in 2012, Andrew listened a lot to albums with Tom Petty, Drive By Truckers and Bob Dylan which became the inspiration for his new songs on the "Summer sleeves" EP. Andrew met up with producer David Barbe (R.E.M, Son Volt) who agreed on mixing the new EP, Andrew describes the sound of these new songs as a mix between roots rock, Americana and alternative country. This is most certainly a grower because I´m not especially fond of the songs the first two spins, however the EP has become a friend of mine now where the highlights are "Little in love" and "Don´t make me sad". "Who wants an easy love" flirts with John Lennon and Neil Young, I like the vibes in this song. "Summer sleeves" will be released in April.
Upplagd av RothNRoll kl. 7:11 PM