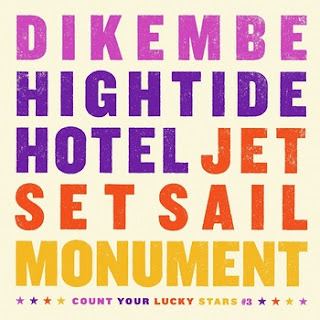 Indierock label Count Your Lucky Stars Records continue with their series of 4-way splits, this one being the 3rd installment with artists like Dikembe, Hightide Hotel, Jet Set Sail and Monument. A cool way to discover new bands in the emo genre I must say, all 4 bands doesn´t move me but I did find a couple of decent songs here. Maryland based Monument released their full length "Goes canoeing" in 2010 and has contributed with the new song "Sophisticated liars" which bring thoughts to early Police, a nice song indeed. Florida based Dikembe is more of a traditional emo band and I really like the way the band has built up the songstructure of "Donuts in a six speed", this is the way emo used to sound like a decade ago. If you dig Dikembe´s song here, check out their "Chicago bowls" EP as well. The other two bands are from Philadelphia, first out Hightide Hotel that has released 2 full length albums and a few EP´s but their new track "Built to last" is the song I like the least on this split, we´re talking indie rock with a punk-ish feel but the song doesn´t make me happy at all. Jet Set Sail, also from Philadelphia, released their self titled debut in 2011 and are contributing with the garage rocker "Strickland north". This one´s a grower for sure, especially the ending of the song that I like a lot. This split is a bit uneven but also with a few shining moments.
Upplagd av RothNRoll kl. 6:54 AM