Detective - Live from the Atlantic studios 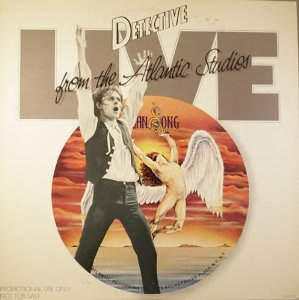 The American/English rock band Detective was a short lived band in the late 70´s with a true star line up of Michael Des Barres - Vocals (Chequered Past), Tony Kaye - Keyboards (Yes), Michael Monarch - Guitar (Steppenwolf), Jon Hyde - Drums (Hokus Pokus) and Bobby Pickett - Bass. Jimmy Page of Led Zeppelin signed them to his Swan Song label and they released two albums in 1977 and 1978 before they parted ways, "Live from the Atlantic studios" was recorded only for radio broadcast in 1978 and is now released on CD for the first time. Detective was a support act to Kiss in 1978 where Kiss fell in love with one of Detective´s songs and thought about recording it with Peter Criss on vocals, 3 tracks on this live album are taken from their 1978 album "It takes one to know one" and the rest are from their self titled debut in 1977. I wonder if not Chris Robinson of The Black Crowes had Detective posters on his wall when he was young, close your eyes and you´ll hear a lot of The Black Crowes in these songs. We´re talking classic rocknroll here for fans of Free, Faces and Bad Company, and it´s always nice to hear a live recording with no overdubs.
Upplagd av RothNRoll kl. 8:44 AM