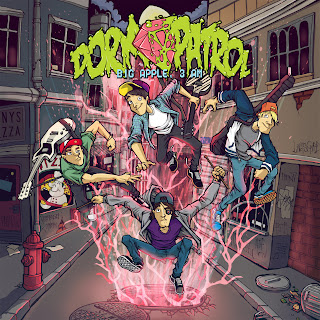 Those who remember the 80´s and how the music made you happy, also noticed how depressive the grunge era was in the 90´s. The dark ages of rock if you ask me, but then pop punk came along with Blink 182 starting it all and rock music became fun again. Now, over a decade later, there are still new pop punk bands poppin up in every corner of the world like the Swedish Dorm Patrol. Their debut album "Big Apple 3 A.M" is produced by Erik Höjden of Kid Down and features a guest appearance from Nikola Sarcevic of Millencolin on the single "Hooked for life". The songs on this 11 track album put me in a good mood straight away and I especially dig "Alright" feat Eric Höjden, that one is super catchy. "Riot" is another great upbeat rocker and I bet a band like All Time Low would be proud over the song "Straight out". Let the party begin!
For fans of New Found Glory, Unwritten Law, Blink 182
Upplagd av RothNRoll kl. 5:43 PM